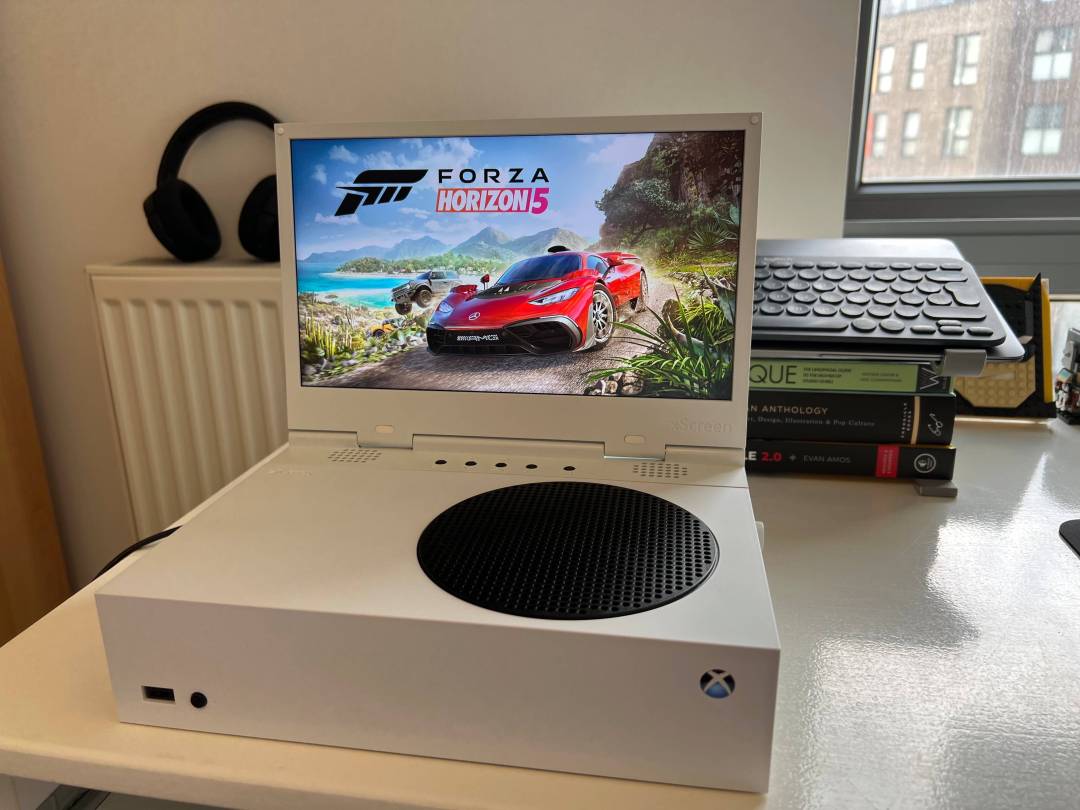 Not only is the Xbox Series S one of the most attractive home consoles ever designed (the aesthetic opposite of its fridge-resembling bigger brother), but it’s also one of the most portable.

Microsoft’s sleek white machine can easily slip into a suitcase without hogging too much space, making it a genuine gaming option for holidays and business trips. If you own a Series S and you know there’s a TV where you’re going, bringing the little Xbox along for the ride can be very tempting indeed.

But what if you didn’t even need a TV? Australia-based startup UPSpec Gaming decided a console as transportable as the Series S should be a truly game-anywhere proposition, so it made the xScreen, a 1080p 60Hz display that you can attach to the console and shut when not in use, effectively turning the Xbox into a porky gaming laptop. With an HDMI connection built in to the device and integrated speakers, all you need is the Series S, its original power cable and somewhere to plug it in.

We’ve been testing the xScreen for several weeks now, and while the asking price is definitely high for what is an admittedly pretty niche accessory, and there are some obvious flaws, we have to say we sort of love the thing.

It might have been made by a start-up not yet a household name, but when the xScreen arrived at our door, our first thought was that it could easily be a first-party product. Once we’d removed it from the nicely designed minimalist packaging we found an attractive accessory that very nearly matches exactly with the Xbox Series S’ white colourway.

The screen part of the xScreen is surrounded by bezels, three of which are pretty thin, and the lower one quite chunky. The white plastic doesn’t feel premium, but it doesn’t feel cheap either, and the whole thing is well built.

The display is attached via a hinge to a power unit which houses the built-in stereo speakers, controls and HDMI connections. When connected to your Xbox the xScreen’s screen portion can be closed just like a laptop, while the hinge system allows you to position it at pretty much any angle when open, which is essential to the whole play anywhere philosophy of the product.

We tended to lower the screen gently when closing it up, as it snaps shut a bit too aggressively for our liking when pushed. We also noticed a bit of creakiness when you put pressure on the back, so preferred to the hold the Xbox by its side when moving it between rooms.

While having the xScreen closed obviously protects the display from external damage, the general flimsiness of the plastic means you’ll probably want to use the carry case when travelling, and that will add a fair bit of extra bulk to your luggage.

Getting your Xbox attached to the xScreen is a quick and painless process. You simply line up the HDMI with the console’s port and slot the two together, using the included thumbscrews to secure the now all-in-one device. There’s a gap at the back of the xScreen attachment that allows you to thread through your Xbox lead to its power port, and the space allows you to keep any Seagate Expansion Cards in the back of the console plugged in. The Ethernet port is blocked, however, making the Series S a strictly Wi–Fi-only machine when used in conjunction with the xScreen. You lose a USB port too.

Because of the matching colours it really looks like the xScreen is part of the console, rather than something bolted on. The UPSpec Gaming logo illuminates when the XScreen is open, too, which is a nice touch.

You can be up and running in less than a few minutes, but there are a couple of things you should do immediately before you start using the xScreen with your Xbox. Because the heat exhaust fan of the Series S sits on the side of the console that faces the display when closed, it’ll very quickly damage it if the machine is left running when you’re not using it.

The first thing you need to do is head into your Xbox’s settings and enable the energy-saving power mode, which uses the least power when the Xbox is turned off and therefore generates the least potentially screen-wrecking heat. Second, if you haven’t already, you’ll want to turn on the console’s HDMI-CEC feature, which allows other devices to turn the Xbox off. That means that when you close the xScreen the console will automatically shut down. It doesn’t work the other way round, though. When you open the xScreen it’ll power itself on, but you’ll need to start up your Xbox manually.

Even with these safety measures adhered to, though, we were still concerned about the Xbox Series S’ exhaust fan, which can get very warm on our console, and its proximity to the display. Turning your Xbox off doesn’t immediately cool it down, so we’d generally leave the xScreen open for 20 minutes or so after playing a game. This worked fine, but if you suddenly have to go somewhere and want to take your Series S and xScreen with you, you might have a problem. We’d recommend always giving the Xbox at least five to 10 minutes to cool down before shutting the xScreen. It’s an issue we’re not sure UPSpec could have avoided without a total redesign of the Xbox, but it’s clearly something to bear in mind before you buy one.

The last thing you’ll want to tweak is resolution. For some reason, when you first start up your Xbox with the xScreen attached it’ll default to 720p. The xScreen supports 1080p gaming, so be sure to head into the resolution settings to change it.

At that price, you’d be right to expect the xSceen’s performance to impress, and it really does. The 11.6in 1080p display’s small size means the picture is pin-sharp, and colours are nice and vibrant for an LCD. Black levels aren’t amazing, but we expected that to be the xScreen’s weakness. It’s maybe not the optimal display on which to play ultra-dark horror games, then, but everything else should be handled just fine.

The Series S’ lack of power compared to the X can sometimes be exposed on a big 4K TV, but on the xScreen, games like Psychonauts 2, Forza Horizon 5, OlliOlli World and Lego Star Wars: The Skywalker Saga all looked great. We had no noticeable issues playing games at the displays’ native 60fps either.

We were generally pretty happy with the default image settings, but you can adjust contrast and brightness in settings, toggle an eco mode, and there are various picture modes for different game genres, as well as an adjustable colour temperature setting. The display can get pretty bright if needed, should you plan to use the xScreen outside. Halo Infinite in the garden is not at all out of the question. What a life, eh.

The built-in speakers definitely aren’t quiet, but they lack oomph, and aren’t the most detailed either. We thought games started to sound a bit unpleasant when approaching maximum volume, but keep things around the 70 mark and they’re decent enough. And if you’re playing alone you’ll more than likely be using a headset anyway.

The xScreen is one of those gadgets we’ll admit we didn’t think needed to exist, especially when we’re already spoiled for choice when it comes to portable gaming. But this is a mostly really well-designed and plain fun accessory that really does make the Xbox Series S a viable on-the-go console. We previously had our Series S hooked up to a bedroom TV, but it says a lot about the quality of the xScreen that we’re leaning towards keeping it and the Xbox together. You’ll always need a power source nearby of course, but Microsoft’s machine effectively becomes a chunky gaming laptop and we love the freedom it gives you.

That said, it can’t be overlooked that the xScreen costs about as much as the console itself, and that’s for a very solid, if unspectacular display with so-so sound. Screen damage from the heat of the console is a worry too if you’re not careful.

Ask yourself how much use you’d really get out of an xScreen – both as a secondary display when the big TV is out of use, and as a holiday/trip companion – before putting down an order. If you’re confident you’d justify the price tag then this folding display is well worth considering.

Expensive for what it is, but travelling Xbox gamers will have a lot of fun with this device

Ela's legacy in Rainbow Six Siege is a big one. She was launched on Sep. 2017 and quickly became one of the strongest roamers in Siege. Her Scorpion had a very controllable recoil, a great number of bullets per charger, and she also had two impact grenades. Plain and simple,...