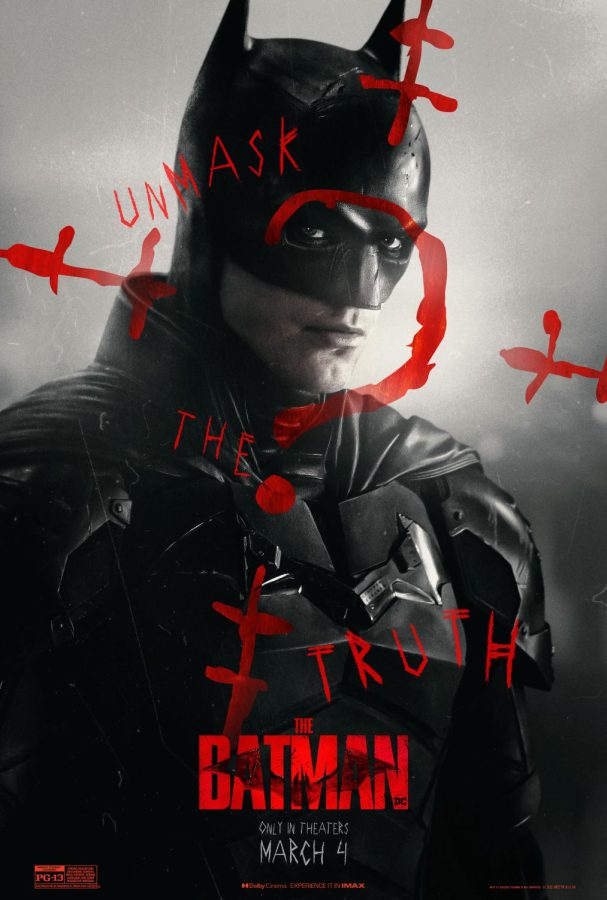 Batman returns to the underworld of Gotham City in “The Batman,” starring Robert Pattinson.

DC Comics newest installment of the beloved Batman franchise elevated the well-known vigilante to new heights in “The Batman.”

Directed by Matt Reeves, the movie had an astonishingly large budget, coming in at around $200 million. Every penny was well used. Viewers could see that every scene had a special something, from Batman’s gadgets to beautifully shot fight scenes, the filmmakers didn’t skimp on anything.

Feathers were ruffled when Robert Pattinson, well-known from the “Twilight” saga, was cast as Batman/Bruce Wayne. Audiences didn’t know what to expect, especially after the atrocious portrayal given by Ben Affleck in the Batman franchise’s most previous films. Though it seemed like yet another misguided casting decision, critics of the casting choice stand corrected.

Pattinson took the role of the beloved superhero and made it his own, giving audiences a much darker and goth version of the character. Batman as a character is feared by both criminals and citizens in Gotham in this film adaptation, his bat-signal being a threat just as much as a beacon of hope.

As Nirvana’s “Something In The Way” plays in the beginning of the film, a song that cuts to the core and leaves the audience feeling unsettled, it sets the tone for the entirety of the movie. It was also one of the few songs heard throughout the entire movie, playing whenever Batman/Bruce is struggling.

As Pattinson embodies Batman, he is captivating. His quiet yet intense portrayal shades every scene. Gerard Way, frontman of My Chemical Romance, would be proud of the emo makeup Batman always wears under his mask.

Batman’s outfit, something which changes from movie to movie, is also interesting. The suit serves as a way to try and make Pattinson look as though he is extremely muscular, but it’s Batman’s boots that are a point of contention. These boots must be made from something no other shoe has ever been created from before, as in multiple scenes you can hear Batman coming out of the dark a full minute before he appears.

Any time Batman phases back into Bruce Wayne, something is lost. Wayne, a billionaire orphan, still presents a lovely emo forefront, but dresses as if he shops at Hot Topic and PacSun, his clothes not fitting him and his hair an early Thirty Seconds to Mars Jared Leto haircut.

Wayne’s representation is also somewhat hilarious, as the movie tries so desperately to make Pattinson seem like a sex symbol. From a few shirtless scenes to showing his shoulders multiple times, they definitely want to emphasize on the sex appeal, which seemed unnecessary.

During one such scene, as Wayne pushes a massive antique wooden table across the floor of his mansion, his shoulders flex. The part that really stood out though was when he began spray painting the table and floor, as only a billionaire would spray paint an antique table and gorgeous, deep wooden floors.

Another difference between this and previous Batman films is our main character’s mode of transportation. Pattinson is on a motorcycle for the vast majority of the film, and when the batmobile does make an appearance, it’s an amped up version of the car Wayne drove in an earlier scene.

One of the most humorous moments in the movie is when the Batmobile is first seen, revving its intense engine only to stall out when Pattinson’s character goes to accelerate. The darkness of the movie contrasts well with these moments of comedic relief, such as an officer who was rude to Batman later sucking up to Wayne, or The Penguin waddling while being tied up.

The Riddler, played by Paul Dano, is the villain of this story. His kidnapping and murders of prominent figures in Gotham leaves the city in fear of what’s coming next. Dano’s unhinged portrayal of the Riddler is extremely well done. The audience feels sick when he comes on screen, especially after he is unmasked.

The camera work and setting of “The Batman” is incredible. The entire city looks run-down and dirty, meeting the desperation seen in Wayne himself. The camera work lets the city take on a life of its own, especially when utilized as a POV shot showing where Batman is going.

The fight scenes are some of the most intricate and well done ones that have been seen on-screen in recent years. The crew utilized darkness and elements such as water, fire and fog to enhance every scene.

Though it apparently rains more in Gotham than it does in England, leading to some cool and rainy fight scenes, the scenes that really shine are the ones where Batman is only illuminated by gunfire going off as he fights his way through darkness. It is phenomenal to see his silhouette taking everyone down despite being shot at.

Catwoman also makes an appearance in this movie, this time played by Zoe Kravitz. A usually hyper-sexualized character, Kravitz’s version of Catwoman is a more developed person. Seeing Catwoman portrayed as a multi-faceted character was refreshing, especially since she had her own plot line that brought the movie together nicely.

The movie as a whole did Batman justice. The cast was full of interesting actors, from Pattinson to a heavily made up Colin Farrell as The Penguin. Officer Gordon was played by Westworld’s Jeffery Wright, a fantastic choice, as he embodied the role in a quiet yet fierce manner.

The biggest message of the movie is also a new take: Batman has more to give to Gotham than revenge, that he can be the beacon of hope they need to lead them out of the dark times.