by NewsReporter
in Metaverse

During Future Talks at the Museum of the Future, Alex Kipman walks the audience through the experience of Microsoft HoloLens 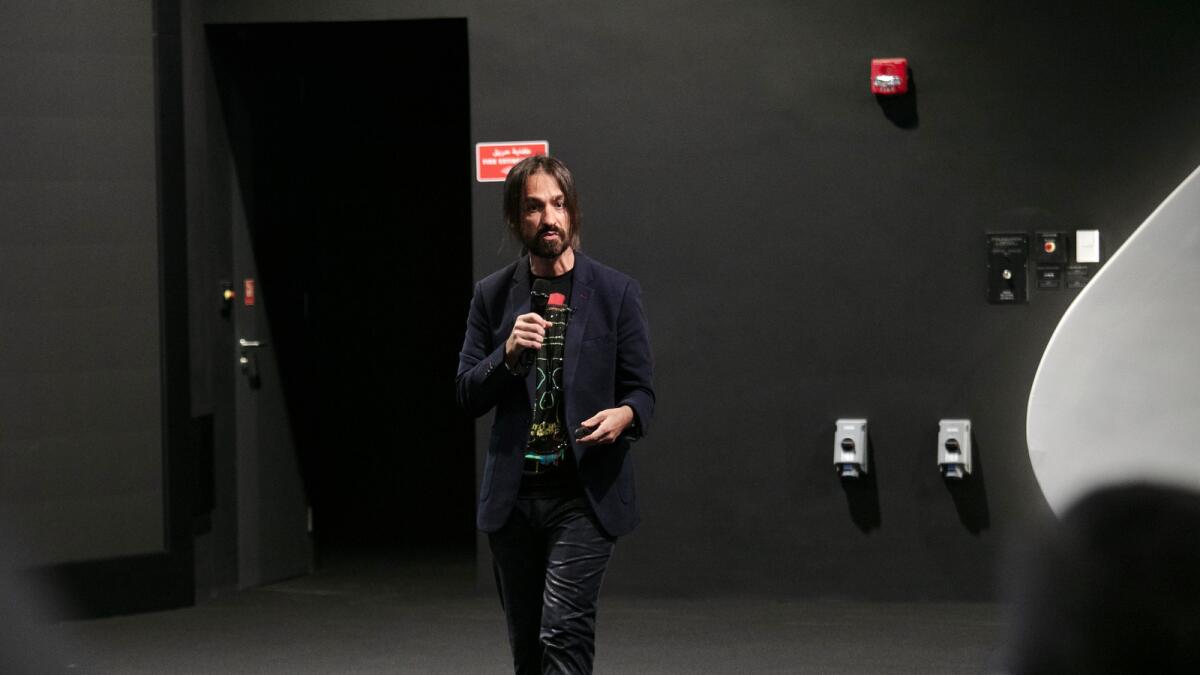 Alex Kipman during Future Talks at Dubai’s Museum of the Future. — Supplied photo

The Metaverse, a 3D universe where the boundaries between physical and virtual reality are dissolved, is no longer a science fiction but “science-fact”, Alex Kipman, vice-president of Artificial Intelligence and Mixed Reality at Microsoft. Aided by mixed-reality technology such as the Microsoft HoloLens; it allows users to seamlessly blend into a virtual environment, he said.

Kipman was speaking at Dubai’s Museum of the Future, during the third session of the ‘Future Talks’ series. Kipman described the Metaverse — a persistent, online, 3D universe that combines multiple different virtual spaces as a future iteration of the internet which will seamlessly blend the virtual and real world.

Kipman walked the audience through an immersive video of what it feels like to see through the eye of the HoloLens; to rousing applause from the audience.

The HoloLens — Microsoft’s take on augmented reality, which they call “mixed reality”, — is a pair of mixed reality smartglasses that uses multiple sensors, advanced optics, thermal sensors and holographic processing that melds seamlessly with its environment. These holograms can be used to display information, blend with the real world, or even simulate a virtual world.

“These are one of the key technologies that have allowed us to progress forward in this journey to displace space and time,” he said, pointing out that the HoloLens is already being used in the real world; such as in operating theatres, enabling surgeons to view three-dimensional holographic images of a patient’s anatomy and move those virtual images around to see them from different angles.

The future is a multifaceted mixed reality

Kipman, who was chosen by Time magazine among the 100 most important people in the world for 2011, also talked about the current and future applications of mixed reality, saying that this technology opens the door to achieving leaps in the field of education, especially by mixing theoretical education with realistic training and allowing students to test different devices and systems or moving to the fields of historical events to live the experiences in them as if they were on the ground.

He added that mixed reality will have a tremendous impact on studies in the fields of health and medicine, entertainment, the military and defence sector, remote work and retail.

Drawing his dialogue to a close, Kipman praised the UAE for its vision for the future.

“I am extremely impressed with the vision of UAE; it is my first trip here and to just see the consistency of vision and execution that allows you to, from just short of two generations, to go from where you were to where you are today is nothing short of visionary.”

Museum of the Future

Khalifa Al Qama, Director of Dubai Future Labs, said: “Discussions about mixed reality and the opportunities that metaverses provide to humanity in all sectors in the future reflect the forward-looking vision of the Museum of the Future, which employs the concept of immersive experiences for the visitor to the future to live the experience himself in all its aspects and dimensions.”

He added: “At the Museum of the Future, we seek to provide a better understanding of the opportunities that metaverses and mixed reality hold, to help societies face the future challenges and devise better ways to address them. This stems from the Museum’s mandate as a living laboratory for innovation and foresight in the fields of health, education, smart cities, energy, and transportation.”

Meta is planning to bring its Horizon Worlds social metaverse platform to the web, Meta CTO Andrew “Boz” Bosworth said in a tweet on Thursday. Being available on the web would mark a major expansion for the platform, which is currently only available on its Quest VR headsets. A web...

How To Protect Your Intellectual Property In The Metaverse – Security Intelligence

Will people ever live in a digital world 24/7? Nobody knows for sure, but the metaverse is certainly expanding rapidly. As the world dives deeper into the digital realm, companies need guidance on how to protect their assets and intellectual property (IP). Consider that the top 10 most expensive NFTs...

tolgart/E+ via Getty Images Investment Thesis The Roundhill Ball Metaverse ETF (NYSEARCA:METV) is designed to offer investors exposure to the Metaverse. Emerging technologies such as virtual reality and game engines allow the Metaverse to take form and grow as they seek to expand the capabilities of a virtual world. Based...

In-Person VR Is A Crystal Ball To The Metaverse. COVID Tried To Shatter It – CNET

The film Ready Player One, based on a 2011 book, imagines humanity addicted to a society existing in a virtual-reality game. Jaap Buitendijk The Infinite wasn't my first instance of traveling miles to try a virtual-reality adventure since the world reopened. But it was the most epic.A massive installation that...