by NewsReporter
in Local News

It was a frightening moment for several residents after a blaze broke out at the Central Apartments in Southwest Detroit Tuesday morning. One woman was taken away while receiving oxygen, but no other injuries were reported.

TUESDAY NEWS HIT – Holding her cat with a big grin on her face, a girl was one of several victims of an apartment fire on Detroit’s southwest side.

Only hours earlier, the girl, Rev the cat, and, 19 other occupants of the Central Apartments in Detroit were fast asleep when smoke began to appear outside the back windows.

“It was crazy, I was asleep, I heard a woman yell ‘fire fire fire’ got my daughter and came outside,” said Dajanette Morrow.

“It was a blazing fire that blew out the back window, it was just crazy,” she said.

The Red Cross has since been called to the road to help victims now displaced by the fire. 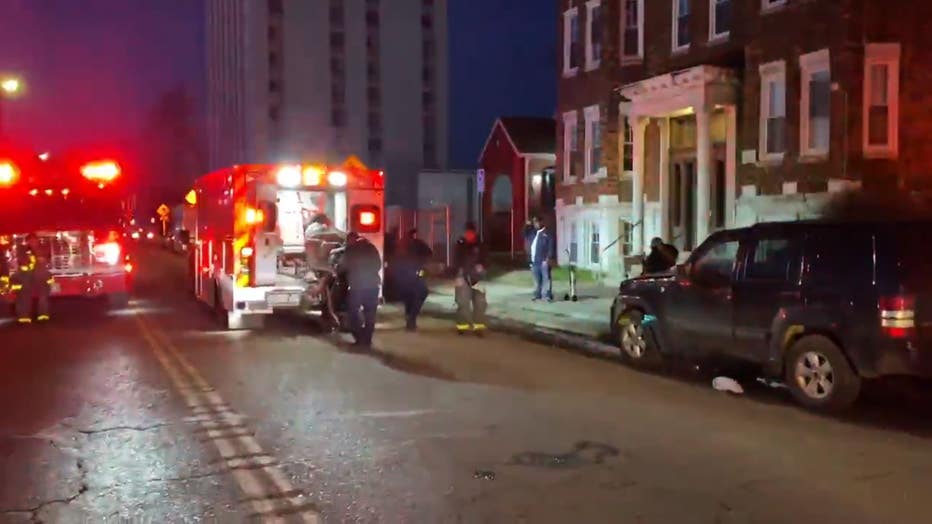 Woman taken away after in ambulance after fire at Detroit apartment.

According to the Detroit Fire Department, they were on scene by about 5:15 a.m.

They said no one was injured in the fire, however, one woman who was on oxygen was spotted being taken away in an ambulance. She’s expected to be okay.

The cause of the fire remains unknown.

The family of Emilio Valdez has been waiting a long time for today – when someone would be held responsible for his murder. His sister Melissa Fielder said she never lost faith that it would happen – and spoke about what her beloved brother was like.

Emilio was one of eight siblings. He died under tragic circumstances on June 7th, 2018. “It’s going on four years and they remembered him,” his sister said. Four years since the body of 20-year-old Emilio Valdez was found shot twice and left in Osmun Lake in Pontiac. The Oakland County Sheriff’s Office has named three suspects, acquaintances of Valdez.

“We all make mistakes,” Fielder said. “His was trusting people who he thought were his friends.” Those “friends” are set to be charged in connection with his death. Angel Alvarez, his brother Juan Hernandez, and their mother Guadalupe Davila-Rodriguez, were all arrested Friday. Alvarez will be charged with murder, his mom and brother set to be charged with accessory after the fact.

“It is a little weight lifted,” she said. “It also brings anxiety of what is to come next.” The Valdez family knows it will be hard to hear the details of how Emilio died, so in the meantime will continue to focus on the light that he brought into his life. Detectives say, Alvarez, the man accused of murder, was questioned at the time of crime – but told them he had no idea what happened.

Security cameras were rolling when an SUV smashed into the side of Tycoons Gentlemen’s Club last week. The crash caused more than $7,000 in damages to the club off Eight Mile on Detroit’s east side, but thankfully there were no injuries.

“(We were) fortunate that no one in the building at all because if it happened during business hours it would be a different news story,” said Lou Econ, manager, Tycoons. “We feel that this was something that was done intentionally and maliciously.” Video shows that the suspect tried twice to ram the SUV into the building, but doesn’t quite get enough speed – until his third time.

Econ says it looks like they put a brick or rock on the gas pedal, and that worked. “They went through a brick and cinder block wall that’s about 12 inches thick,” he said. They want to find out who did this and there is big money on the line for tips – a $10,000 reward. “We don’t to prosecute, we just want answers,” he said.

There are more questions like even with the gaping hole, why didn’t they try and take cash or alcohol? “We haven’t had any issues sometimes there is always someone is jealous or envious of what you do, and they react in certain ways,” he said. A few tips have already come in and they’re willing to pay, for more – that lead them in the right direction.

What happens to Barry Croft Jr. and Adam Fox?

A jury’s inability to reach a unanimous verdict for two men charged in a conspiracy to kidnap Michigan Gov. Gretchen Whitmer means the federal government can take them to trial again.

The jury last week acquitted Daniel Harris and Brandon Caserta, whom prosecutors described as “soldiers” in the foiled plot, but deadlocked on the alleged leaders, Adam Fox and Barry Croft Jr. It was an extraordinary setback for the government, which claimed the men wanted to trigger a civil war before the 2020 election.

The last we heard from the prosecutors, U.S. Attorney Andrew Birge said both men were “awaiting trial and we’ll get back to work on that.” “The government has two cooperating defendants who pled guilty, who said they were part of the crime. That’s pretty compelling evidence,” Mark Chutkow who recently haledthe criminal division of the office said, referring to Ty Garbin and Kaleb Franks, who testified for prosecutors.

In other cases where hung juries occurred, the prosecutors sharpened their focus and got rid of the discussions of excess.

Two people and a dog were found dead from suspected carbon monoxide poisoning Sunday afternoon in a mid-Michigan community north of Saginaw. Michigan State Police were dispatched to a residence on Kaiser Tower Road in Fraser Township after a 911 caller reported finding two people dead inside around 3:30 p.m.

According to police, improper ventilation while operating the power sources “may have caused fatal levels of carbon monoxide to occur.” The deceased were identified as: Bridgitte Hill, 60, of Pinconning and Dennis Mackenze, 60, of AuGres.

The dead are a reminder of the importance of proper ventilation in a home if running appliances, police said. If someone is struggling to obtain heat or electricity services, please call 2-1-1 to be connected with services that can help.

What else we’re watching

A chilly start today won’t dampen the spirits of what is shaping up to be a beautiful weather day. Mostly sunny, in the 60s, and more warmth on the way.

President Joe Biden is visiting corn-rich Iowa on Tuesday to announce he’ll suspend a federal rule preventing the sale of higher ethanol blend gasoline this summer as his administration tries to tamp down prices at the pump that have spiked during Russia’s war with Ukraine.

Most gasoline sold in the U.S. is blended with 10% ethanol. The Environmental Protection Agency will issue an emergency waiver to allow widespread sale of 15% ethanol blend that is usually prohibited between June 1 and Sept. 15 because of concerns that it adds to smog in high temperatures.

Senior Biden administration officials said the move will save drivers an average of 10 cents per gallon at 2,300 gas stations. Industry groups say most of those stations are in the Midwest and the South, including Texas.

Biden is to announce the move at a biofuel company in Menlo, west of Des Moines. Iowa is the country’s largest producer of corn, key to producing ethanol.

SEGUIN, Texas — Seguin police said a suspect who is accused of killing a teenage girl, shooting an 18-year-old man has been arrested.Draven Rene Reyes, 20, was apprehended in San Antonio around 11 a.m. Tuesday. Police said Reyes was discovered on the east side of the city, said police. Police...

SEGUIN, Texas – Cibolo Mayor Stan “Stosh” Boyle pleaded guilty to two felony charges Tuesday in exchange for a deal that could allow him to avoid conviction and complete his second term as mayor.This, despite also acknowledging as part of the deal that he wasn’t eligible under state law to...