by NewsReporter
in Metaverse

Nonetheless, the question for investors is whether the longtime industry stalwart or the upstart platform can better serve them, and answering that question involves a deeper dive into both companies. 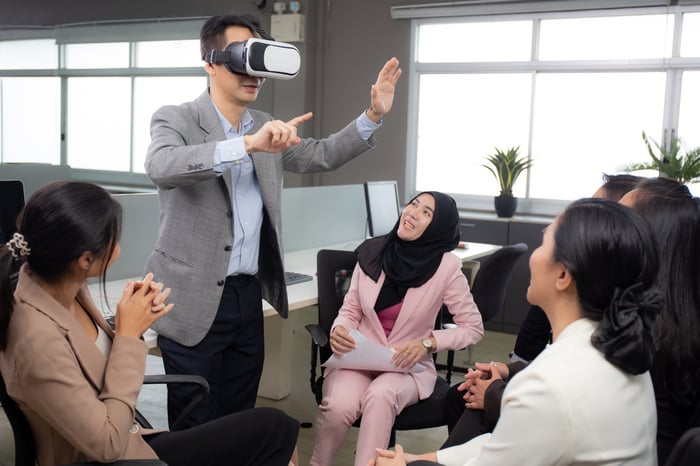 How Nvidia stock can benefit its investors

Nvidia is an obvious metaverse choice, as the maker of GPUs has applied its graphics capabilities to artificial intelligence, data centers, and other applications in recent years. This has not only made Nvidia one of the most essential chip stocks, but it also makes Nvidia chips ideal for supporting the metaverse and its VR-based capabilities.

To this end, it announced an expansion of the Nvidia Omniverse in August. The Omniverse serves as a development and simulation platform that serves as a foundation for the metaverse. This will enable reviewers, artists, and designers to work together in real-time across software applications, opening the metaverse to millions of additional users.

Moreover, Nvidia holds an 83% market share in the GPU market, according to Jon Peddie Research. Such dominance means that Nvidia will support the overwhelming majority of metaverse experiences.

The metaverse and other innovations continue to boost the top and bottom lines. The company generated $19.3 billion in revenue in the first three quarters of fiscal 2022, 65% more than the same fiscal 2021.

Since the increase in the cost of revenue and operating expenses dramatically lagged revenue growth, Nvidia earned more than $6.7 billion in net income during the first nine months of fiscal 2022. Despite income tax expenses rising significantly, net income surged by 135% compared with the same period in 2022.

These successes have helped Nvidia’s stock rise by about 130% over the last year. However, it supports a price-to-earnings (P/E) ratio above 90, and its 31 price-to-sales (P/S) ratio comes in well ahead of archrival AMD at 12 times sales. Still, the potential for the metaverse has likely contributed to this higher valuation, a factor to consider when evaluating the case for Nvidia stock.

Roblox bills itself as the company “powering imagination.” Within its ecosystem, users create and share experiences within 3D environments created by themselves or other users. They can download and use Roblox for free on smartphones, tablets, gaming consoles, and VR headsets such as Meta‘s Oculus Rift.

It has become particularly popular with children, as about half of its user base is under 13. Moreover, the games can provide income as Roblox will give creators a percentage of all revenue generated from a specific environment.

Not surprisingly, usage surged at the onset of the pandemic as school closures left millions of children stuck at home. Nonetheless, the metaverse company is more than a pandemic stock, as Roblox’s user growth did not stop when the children returned to the classroom. In Q3, Roblox reported more than 47 million daily active users (DAUs), 31% higher than the third quarter of 2020.

Investors should also remember that Roblox stock launched its IPO in March. It has risen by 45% since that time, though it has fallen by almost 30% from its high in November as user monetization trends and slowing DAU growth appeared to hurt the stock.

Despite this decline, its P/S ratio stands at 30. But while Roblox has become a pricey stock, it is a little cheaper than Unity Software, which sells for about 40 times sales. Moreover, with triple-digit revenue growth and a recent pullback, Roblox could outperform the S&P 500 despite a hefty valuation.

Although both metaverse stocks should continue to drive massive revenue growth, Nvidia will likely prove itself a better choice for most investors. Roblox’s huge losses pose risks to investors should uncertainty arise. Like Roblox, Nvidia shows signs of overvaluation, but its profits and leadership in the GPU space should protect investors regardless of the market environment stocks face.

This article represents the opinion of the writer, who may disagree with the “official” recommendation position of a Motley Fool premium advisory service. We’re motley! Questioning an investing thesis — even one of our own — helps us all think critically about investing and make decisions that help us become smarter, happier, and richer.

Will Healy has no position in any of the stocks mentioned. The Motley Fool owns and recommends Advanced Micro Devices, Meta Platforms, Inc., Nvidia, Roblox Corporation, and Unity Software Inc. The Motley Fool has a disclosure policy.

Meta is planning to bring its Horizon Worlds social metaverse platform to the web, Meta CTO Andrew “Boz” Bosworth said in a tweet on Thursday. Being available on the web would mark a major expansion for the platform, which is currently only available on its Quest VR headsets. A web...

How To Protect Your Intellectual Property In The Metaverse – Security Intelligence

Will people ever live in a digital world 24/7? Nobody knows for sure, but the metaverse is certainly expanding rapidly. As the world dives deeper into the digital realm, companies need guidance on how to protect their assets and intellectual property (IP). Consider that the top 10 most expensive NFTs...

tolgart/E+ via Getty Images Investment Thesis The Roundhill Ball Metaverse ETF (NYSEARCA:METV) is designed to offer investors exposure to the Metaverse. Emerging technologies such as virtual reality and game engines allow the Metaverse to take form and grow as they seek to expand the capabilities of a virtual world. Based...

In-Person VR Is A Crystal Ball To The Metaverse. COVID Tried To Shatter It – CNET

The film Ready Player One, based on a 2011 book, imagines humanity addicted to a society existing in a virtual-reality game. Jaap Buitendijk The Infinite wasn't my first instance of traveling miles to try a virtual-reality adventure since the world reopened. But it was the most epic.A massive installation that...