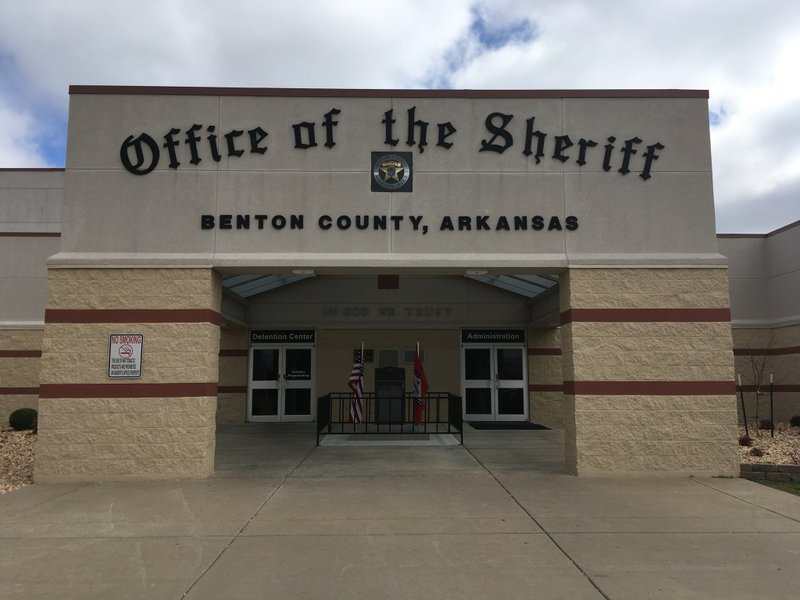 BENTONVILLE — The Benton County Sheriff’s Office is using technology to help aid detainees who may be in medical distress.

The sheriff’s office implemented Custody Protect a month ago, said Maj. Bob Bersi. He said the jail is the first one in Arkansas to use the program. It allows jail officials to get an automatic alert if an inmate is in a medical crisis, which means they can get aid to him quickly, Bersi said.

“It’s a way for us to know if something bad is about to happen and then get help to them,” Bersi said.

Bersi said the bands will be placed on inmates with medical situations.

Tyler Ross, a jail lieutenant, said sensors are in bands that can be attached to a person’s wrist or ankle. Ross said jail staff downloaded the program on an iPad, and the sensors send detainees’ heart rates so nurses know if it suddenly changes.

Staff can also download the app on their county issued iPhones, Ross said.

The bands designed for the ankles are used in situations where the detainees are combative and try to fight against wearing the bands. He said jail staff lock the bands into place.

The bands for the wrist are similar to ones for watches. Bersi said the jail has 45 regular bands and 14 larger, locking bands.

The Sheriff’s Office purchased the monitors and equipment from 4Sight Labs, he said. The cost is $69,000 a year, and it includes any software updates, he said. The office requested the money for the program in the 2022 budget.

Tracey Robison, jail nursing supervisor, said the bands are used for when individuals with serious illnesses come into the jail. She said the bands will also be used for a person who may have recently suffered a heart attack or stroke or has a diabetic issue. The sensors also can monitor people who may be severely detoxing from drugs or alcohol, Robison said.

She said officials had not received any red alerts since beginning the program. Two detainees had the bands on Thursday, according to Robison.

The inmates with the bands won’t be held in pods with other inmates. Ross said they will be held in the jail’s medical or booking areas.

Bersi said the sensors also allow the staff to monitor a person’s movements.

Robison said she’s excited to have the program. She said one person was detoxing, and jailers kept the band on him for 24 hours, so she was able to monitor his heart without having to come and physically check him.

Bersi said the one challenge has been maintaining coverage in the jail. He said the company is working on the issue.

He said he believes they will be able to monitor detainee’s blood pressure and pulse with the system.

John DeFalco, the chief executive officer for 4Sight Labs, said the company was founded in 2020 by a team of Silicon Valley engineers and military special operations veterans.

“We came up with the idea for Custody Protect after seeing our friends in law enforcement and corrections struggle to keep people safe on their watch,” DeFalco said. “Detainees in our correctional system are suffering from drug addiction and mental illness at unprecedented levels. Officers have to go from arrest to rescue in the blink of an eye.”

DeFalco said officers need tools that watch a detainee from the point of arrest, through transport and into detention.

“A detainee can go into crisis anywhere,” he said. “Custody Protect was made to work everywhere, to save peoples lives, to protect officers’ careers and to save money by preventing costly liability.”

Capt. Alan Johnson with the Washington County Sheriff’s office said the county does not use the monitoring devices at the detention center. Johnson said the Sheriff’s Office considered the monitors but decided against them.

He said officials felt the monitors are too expensive and concerns were raised about potential medical liability issues if they were used.